How to Make Money as a Kid: 15 Ways to Earn Money 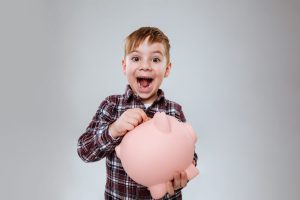 A kid who earns money through his or her own efforts not only feels a great sense of accomplishment and self-confidence, but also gets an early start on the road to fiscal responsibility.  Earning an allowance for helping with household chores is not quite the same. Moreover, some families can not afford to pay allowances, while others believe that children should complete these chores as their contribution to the family unit rather than for monetary gain. There are a multitude of ways that even very young children—children 12 years of age or younger—can earn their own money.  This article provides 15 possibilities, to include quick ways to make money.

This is probably one of the first venues that comes to mind when people think about a way a kid might make some fast money.  All it takes is a clean, sturdy table, a supply of disposable cups, some lemonade mix, paper towels to wipe up spills, a pitcher or other beverage dispenser, an ice chest to hold cubes and extra jugs of lemonade, and a box for the money, with enough coins to provide change, if needed.  As with many things, location is everything.  Choose a place or event that is going to generate some traffic, such as one close to a youth athletic field on game day, or set up a table on the day of a neighborhood garage sale.

Garage sales are another fast way to make money as a kid. Older children can organize their own, while a younger child may need a bit of help setting one up, but both can sell toys, games, and clothes they no longer want or need in this venue. They might also be able to get their parents and neighbors to contribute some items to the sale, the bigger the better. They could offer to split the proceeds of the sale of the contributed items with the contributor as an incentive, if necessary.  If it looks like there will be a large number of items available, the sale can be advertised on Craigslist or a social media platform to generate traffic.

A number of YouTubers under the age of 12 have achieved phenomenal success.  Ryan Kaji was only six years old when he first appeared on YouTube as he responded to new toys as he opened them.  Now, this 8-year-old has 23 million subscribers to his Ryan’s World YouTube channel, which reported $26 million in earnings in 2019.  Russian-born, 5-year-old Anastasia Radzinskaya’s YouTube channel, which features her playing with her father, earned $18 million in 2019, thanks to brands like Legoland that quickly recognized the potential.

Some of the methods listed above will require more involvement by the parents of the kid, depending on the age of the child. YouTube is a primary example. A child cannot obtain a YouTube account in his or her name.  The parent must obtain the account instead and create a separate channel for the child’s account within the parent’s account.  Although this kid money-producing option may require the most engagement on the part of the parent, it can also be the most lucrative. The most successful kid YouTubers under the age of 12 have millions of subscribers, which translates into millions of dollars.

Related: How to Make Money as a Teen

Many dog owners work long hours and are unable to walk their dogs as regularly as they would like, so they enlist the assistance of a dog walker.  Most kids under 12 are capable of handling this task.  An ad in a neighborhood newspaper or on the bulletin board of a nearby grocery store could generate some response.  Alternatively, the child could design and print out a flyer to distribute door-to-door in the neighborhood.

Although many people prefer to take their pets with them when they are away on vacation, sometimes this is not possible.  And it is usually impossible when they have to travel for business.  Some may opt for the services of a kennel, but most seem to prefer letting their beloved pet stay in familiar surroundings and will gladly pay someone to ensure their pet has adequate food, water, and exercise while they are away. This will pay even more than dog walking, but dog-walking can also lead to these types of jobs.

Another way for kids to make money is by advertising to help with yard work.  Even young children can pull weeds and pick up twigs.  Pre-teens can also rake leaves and needles and mow lawns.  These services can be advertised via a neighborhood newspaper, a community bulletin board, or flyers that are distributed door-to-door.

If people are away from their homes for a week or more, they often leave behind house plants and/or lawns that require regular watering, a job that even the younger children can handle.

Many pre-teens make hay when the snow flies by shoveling their neighbors’ driveways.  All it takes is a snow shovel and some muscle. An entrepreneurial kid might even get their neighbors to sign up for their services for the winter season, assuming the kid is willing to get up early to clear those driveways before it is time for him or her to catch the school bus.

A number of local businesses pay for people to hang ads on doorknobs within a neighborhood or put flyers on the windshields of cars in a parking lot. This job can be handled by kids of all ages although parents might want to keep a watchful eye on the younger children to keep them out of danger.

This might be one of the most fun ways to make money as a kid if you live near a golf course. It can also be a lucrative one. A kid of any age can collect a large number of balls by simply walking along the roughs and edges of the course, much like an Easter egg hunt. (He or she might want to be equipped with a backpack to carry all the “loot” collected.)  Any balls that have cuts or are in otherwise poor condition should be discarded.  The other ones should be thoroughly cleaned and separated by brands. New Titleist balls sell for close to $50 a dozen, so a dozen of used Titleist balls could easily sell for $10 or more on Craigslist or eBay.

Although a lot of readers may be raising their eyebrows at this one, keep in mind that we are ofttimes more creative in our youth. Casey Golden, the founder and managing partner of Golden Rule Technologies, was only 11 years old when he invented the biodegradable golf tee and patented it (the latter with some help from his parents).

There are numerous contests for youth with a particular talent, for example, photography, art, and writing. Many of these pay cash prizes, but perhaps even more importantly, the kid gets to mention the award on his future job resume or college application.

Related: How to Make Money in College

Older kids can offer car-washing—and even car-detailing—services through advertisements on Craigslist, local bulletin boards, and door-to-door ads. They may even subcontract their younger siblings to perform some of the work, like scrubbing the car mats, enabling them to earn some quick money as well.

While many parents might be uncomfortable hiring a pre-teen to babysit their child, many would be very appreciative to have some help with the kids to allow them to get some work done when they themselves are still in the home.  A 9-to-12-year-old could successfully fill this bill, keeping the children occupied while the parents complete other necessary tasks.

Although most surveys are targeted to adults, there are some that want the opinions of the younger set. A lot of these require that the respondent is 13 or older, but there are a few that want to collect answers from the 6-to-12 age group. Panelpolls’ Kids Projects pays for opinions of kids ages 6 to 12 on surveys regarding new TV shows, games, and trends, among other things. Parents need to sign their child up and provide their permission for the child to participate in the surveys.  Kidz Eyes is another site that surveys the 6-to-12-year-old age group about kid-related products and services, including food, games, and toys.